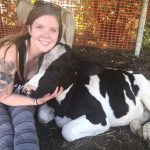 Kelsey Linsig is a 37 year old Calagarian who is a Vegan Animal Rights Activist. By her own admission, Kelsey used to laugh at the small group of protesters she saw every year at the infamous Calgary Stampede. Now she is one of them! A peaceful protest at the rodeo was her inauguration into activism. Since then she has participated in  slaughterhouse vigils,  protests, online activism and  Anonymous for the Voiceless, Cube of Truth. Being part of the recent Meat the Victims Campaign at Excelsior Hog Farm has inspired her to become even more active going forward.

Kelsey  worked in media (radio) for almost 20 years and since becoming vegan three and a half years ago, struggled with always having to censor herself on air.  Here are some examples of instructions Kelsey might have received about her reporting. It was, as one can imagine, soul crushing for her to have to tow the party line.

You can’t say anything negative about the Stampede because they are a major client.
Yes, you have to read that sponsor tagline  and promote chicken wings.
Please make sure you’re talking about our event with the Canadian Cancer Society (even though they test on animals).

Kelsey was let go from her position this past February and she was mightily relieved to now be able to speak up on behalf of all exploited animals, without fear of repercussion.

On April 28, 2019, Kelsey and about 200 other activists walked onto the Excelsior Hog Farm in Abbotsford, Alberta, Canada. Fifty or so of these activists, including Kelsey, entered one of the barns where the pigs are  confined and formed a peaceful “sit in”. She first became involved after seeing a pretty generic post on social media about “wanting to stand up for the animals.”

The Meat the Victims Movement which reported this event when it was ongoing, is group-less and leaderless. They are concerned citizens who participated of their own accord, following a PETA released video which documents the gross exploitation and abuse of pigs within the walls of the barns. The action was peaceful and respectful. Everyone inside the barn was arrested  and have since been released. One activist, Amy Soranno is facing charges  and is scheduled to appear in court in Abbotsford on July 8th.

Kelsey’s Poignant Recounting of her Experience

~May 1st, 2019~ It’s been an excruciating 3 days since we walked out of Excelsior Hog Farm. I haven’t been able to stop thinking about all the pigs we left behind. As many of the other activists who were there have expressed:

It has been difficult to function and to go back to everyday life. It’s hard to even have conversations or explain to friends and family how being in that barn affected us. But, we were lucky. We got to leave and go out into the sunshine and fresh air. Those pigs are still inside that hell hole, trapped, exploited and abused.

I’ve had numerous people comment about how awful and sad the footage is and how that particular farm should be shut down… which is true! It IS awful beyond description and SHOULD be shut down, but please understand that this farm is not a one-off. What we saw was normal, legal and standard practice in the pig farming industry in Canada. That was one barn, on one farm, in one city…and those scenes play out in virtually every farm, in every city all over Canada and the world.

The farmers themselves and the vets they employ stated that this is a “family farm” and, as such, operates in complete respect of “industry guidelines”. It is shocking to note that, “in Canada, the treatment of animals on farms is not regulated by law, nor overseen by government”. The industry, to all intents and purposes, is self regulating. An undercover video capturing gross negligence on Excelsior Hog Farm was shot by animal rights activists and released last week prior to the Meat the Victims action. The farm has since has come under investigation by the BC SPCA. Ray Binnendyk responds to the allegations:

As a family, this is very hard for us and what we’ve had to deal with in the last number of weeks,” he said. “We really pray that everyone sees the truth about us and that we are good people trying to make a good “product” and raise animals to the best of our ability.”

Binnendyk led the reporters from room to room, through spaces that looked similar to the undercover footage but lacked the cobwebs, corpses, and severely ill-looking animals. “We’re very proud of what we do,” he said.

I am not  throwing all of the responsibility on farmers. Generation after generation of animal farmers has been conditioned to regard the commodification of pigs as normal, natural and necessary.  They  see these pigs as mere products. Are they really worried about a bunch of activists in bio hazard suits contaminating the barns and putting the pigs at risk? Or are they more concerned about the truth of their operation coming to light??

You know what ACTUALLY harms the pigs? – living a life of misery in a tiny cage where they can’t even turn around, burning from the inside out in a gas chamber, having their throats slit and their bodies chopped up to become someone’s 20 minute meal.

It has been both interesting and frustrating to see how many media outlets have spun this story, manipulated information, and portrayed the farmers as the victims. I guess I should have expected that, having been a member of mainstream media for almost 20 years, but it is still disappointing and jarring to witness. It has been my experience that the media censors facts at every turn and will only report or broadcast what they determine is beneficial for them, all the while manipulating their target audience.

This is only the beginning. We are not going to stop fighting until we end this.

Grassroots activism has, in my view, the potential to raise much needed awareness and to effect positive change in our goal to end the exploitation of other species of animals for human wants, not needs.

Veganism….for the animals, for the planet, for humans.

~via Kelsey Linsig~ “MEAT THE VICTIMS” is part of an international movement. There have been similar actions in Australia, the UK and Spain. The aim is to continue to expose the reality of what is happening to the victims of the ‘meat’ industry and to challenge the current mindset within our society.

The action is NOT about any one particular facility, or a call for improved animal welfare standards, but rather a call to end the exploitative and inherently violent farmed animal agriculture industry.

Our message is simple: Animals are here with us, not for us.”

2 thoughts on “Meat the Victims at Excelsior Hog Farm: A first hand account by Kelsey Linsig”