Yesterday, November 1st, 2016 was World Vegan Day. After a little research, I discovered that this special day is 22 years old. It is an annual event  created to commemorate the 50th anniversary of the founding of The Vegan Society, Donald Watson’s Alma mater, as it were.  We have had all that time to create a vegan world and yet our goal remains, as of today, a work in progress. Conservative estimates place the worldwide vegan population at 1%, while other more hopeful studies cite anywhere from 2-3%. It has been reported that the tipping point for all humans to become vegan is 10% and we are just not there yet. 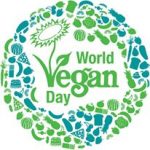 As vegans and AR activists,  we remain hopeful and committed, advocating in many different ways for the liberation of all other animals on this earth who suffer incalculably for human wants, not needs. Of  all the industries which persecute other species of animals for the sake of profit, farmed animal agriculture gets the top spot at  99% of the use, exploitation, abuse and murder of living sentient beings in the name of our conditioned and hijacked palates. Without a doubt, this is human created suffering of great magnitude.

I salute and applaud all advocacy which seeks to educate and to inform  about the pressing need to stop this madness, to illustrate that justice is needed and that becoming vegan will open us up to a world of kindness and compassion for all beings on this planet, not just for those who walk upright and enjoy the dubious honor of belonging to the human race.

And where exactly does the change start? I believe it begins with ending our gluttonous obsession with ingesting the flesh and secretions of other animals. So, that is why I chose to mark World Vegan Day at Marvid,  a Halal Slaughterhouse ( chickens) located in Montréal, Quebec Canada. Over a two hour period at least three trucks, filled with lifeless looking chickens, many almost devoid of feathers, pulled up into the driveway and backed into the bays of death. If the truck is full, up to ten thousand birds can be trapped inside. We can all do the math and understand that this is an astonishing and horrifying number.

I bore witness with my friends who believe as I do that we must speak up and out. We are compelled to  disabuse humans of the notion that other species of animals are commodities, that it is okay to eat their flesh and secretions, to wear their skins and fur on our bodies, to use them for entertainment, to hunt them for sport, to experiment on them, to turn them into furniture, to exploit them simply because we can. And whether we are six at an event, or six hundred, or six thousand, we are one voice, standing in solidarity  with and for those for whom we seek respect and freedom.

Yesterday I stood with two such advocates, people of integrity and good character, people who I am honored to call my friends. Their impassioned and heartfelt speeches illuminate the essence of veganism. I am very happy to be able to share their words with you, while thanking, at the same time everyone who bore witness with us outside Marvid  and, from a wider perspective, every caring person who participates daily in spreading the word, living vegan for the other animals, always for the other animals.

Two nights ago, I watched Before the Flood, the brand new documentary on climate change by Leonardo DiCaprio. The documentary follows him as he travels around the world seeing the destruction that is occurring on our planet. Islands are being flooded, arctic ice is thinning, Greenland glaciers are disappearing, forests are burning and species are going extinct. This is not “new” news. For over 25 years I have been hearing this. At this point most of us are well aware. In one small segment the documentary talked about eating choices, claiming that 70% of all farmed land in the United States is used to feed cattle, and the solution they gave is to not eat cows, but instead to eat chickens.

Today I stand with the chickens at the Marvid slaughterhouse in Montréal,  to say that the solution posed by Leonardo DiCaprio is not a solution at all. It is a travesty, and inherently speciesist. Today is World Vegan Day, and I stand with all the rest of my friends to say today should be the first day of a Vegan world, where every day all beings can live free, where there is as little suffering and exploitation as possible. This is the real solution to worldwide environmental degradation. As important as it is to have renewable energies through solar and wind providing us power, it is equally important to consume less and become Vegan now.

I ask you: Shouldn’t we do absolutely everything that we can to leave the world in better shape than we found it? I believe we absolutely should!
Merci!

The vigils I attend are unique in their own right, yet eerily similar, because  the victims of speciesism are ever present, whether in trucks bound for slaughter or in the hearts and minds of those of us who advocate for them. Other advocates may feel the same as they stand outside zoos, or medical labs, or clothing stores and so on.

Allow me to share with you my  experience at this very same slaughterhouse last year around this time : VEGANS OUTSIDE A SLAUGHTERHOUSE AT AN ANTI SPECIESISM VIGIL…….second verse, same as the first!!!

Vegans and AR Activists at a Vigil on World Vegan Day