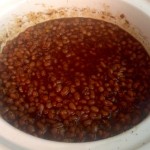 Baked Beans
A variation on a theme - plant based goodness without sacrificing any of the taste, tradition and aroma of baked beans from our childhood and beyond.
Ingredients
Sauce
Servings: servings
Instructions
Sauce
Alternate Cooking Method
Recipe Notes

Serve beans piping hot from the slow cooker or reserve for another day. Add water as needed when reheating.

I usually freeze the beans in 2 cup portions. They make a quick and easy dinner when time is of the essence.

This recipe requires 1 1/2 cups of sugar. Please free to mix and match the combination and quantity, except for blackstrap Molasses, which should not exceed 1/2 cup.

It is that time of the year when those of us who celebrate Christmas are rolling out all the animal fat and sugar laden foods. Eating pigs and their parts is an ignominious tradition indulged in by many. So, let’s talk about beans and the ham hock. The definition is as follows.

A ham hock or pork knuckle is the joint between the tibia/fibula and the metatarsals of the foot, where the foot was attached to the hog’s leg.It is the portion of the leg that is neither part of the ham proper nor the foot or ankle, but rather the extreme shank end of the leg bone.

Since this piece generally consists of much skin, tendons and ligaments, it requires long cooking through stewing or braising to be made palatable.

Apart from the fact that, on paper, this cut of meat (euphemism for animal part) sounds incredibly unappetizing and gross, the definition is rife with euphemisms created by farmed animal agriculture to blind us to the cruelty of their business. How so?-like this!!

A “ham hock” is really a pig’s ankle as is a “pork knuckle”.  The “ham proper” is the pig him or herself, a once living being. The “piece” is the body part of this unfortunate pig and all of his/her friends who meet the same fate. And just take a look at the pictures for a moment. They are disgusting and incredibly sad looking images of animals  served up as a desired food for human consumption.

The issue is the same for salt pork which is another popular “ingredient” in baked beans. The offending words are “pork” and “cut”.

Salt pork is salt-cured pork. It is prepared from one of three primal cuts: pork side, pork belly, or fatback. Depending on the cut, respectively, salt pork may be lean, streaky or entirely fatty.

So, what about those baked beans and the animal ingredients which seem to be an integral part of any “worth its weight in salt” recipe? How could we possibly do without them? Easy-peasy!  Just don’t use them. I have been making plant based baked beans since forever. I don’t really enjoy the taste of them (too sweet for me), but my husband, who is a francophone Quebecois loves them. I think they remind him of his childhood. But I was torn about making them for him because I was so grossed out by the amount of animal fat in this down home delicacy and especially by the piece of animal itself floating in the simmering beans and sauce. And this was way before I became vegan.

So I took an old recipe and I unknowingly did what people now refer to as “veganizing” it. I serve this dish every year at my annual Christmas party and get rave reviews. Turns out that being compassionate tastes good.

One of the fun things about this recipe is that it is super easy to put together and can be “baked” in a slow cooker. There is no need to  stay at home stirring the beans  every hour for the next seven or eight hours. If you like the traditional way of baking beans in the oven, this works too!

Serve beans piping hot from the slow cooker or reserve for another day. Add water as needed when reheating.

I usually freeze the beans in 2 cup portions. They make a quick and easy dinner when time is of the essence.

This recipe requires 1 1/2 cups of sugar. Please free to mix and match the combination and quantity, except for blackstrap Molasses, which should not exceed 1/2 cup.

4 thoughts on “Plant Based Baked Beans”