Sometime ago (longer than I thought it would be), in one of my posts, I promised I would go over the how to of these delectable, tasty morsels called Chocolate Coconut Macaroons, 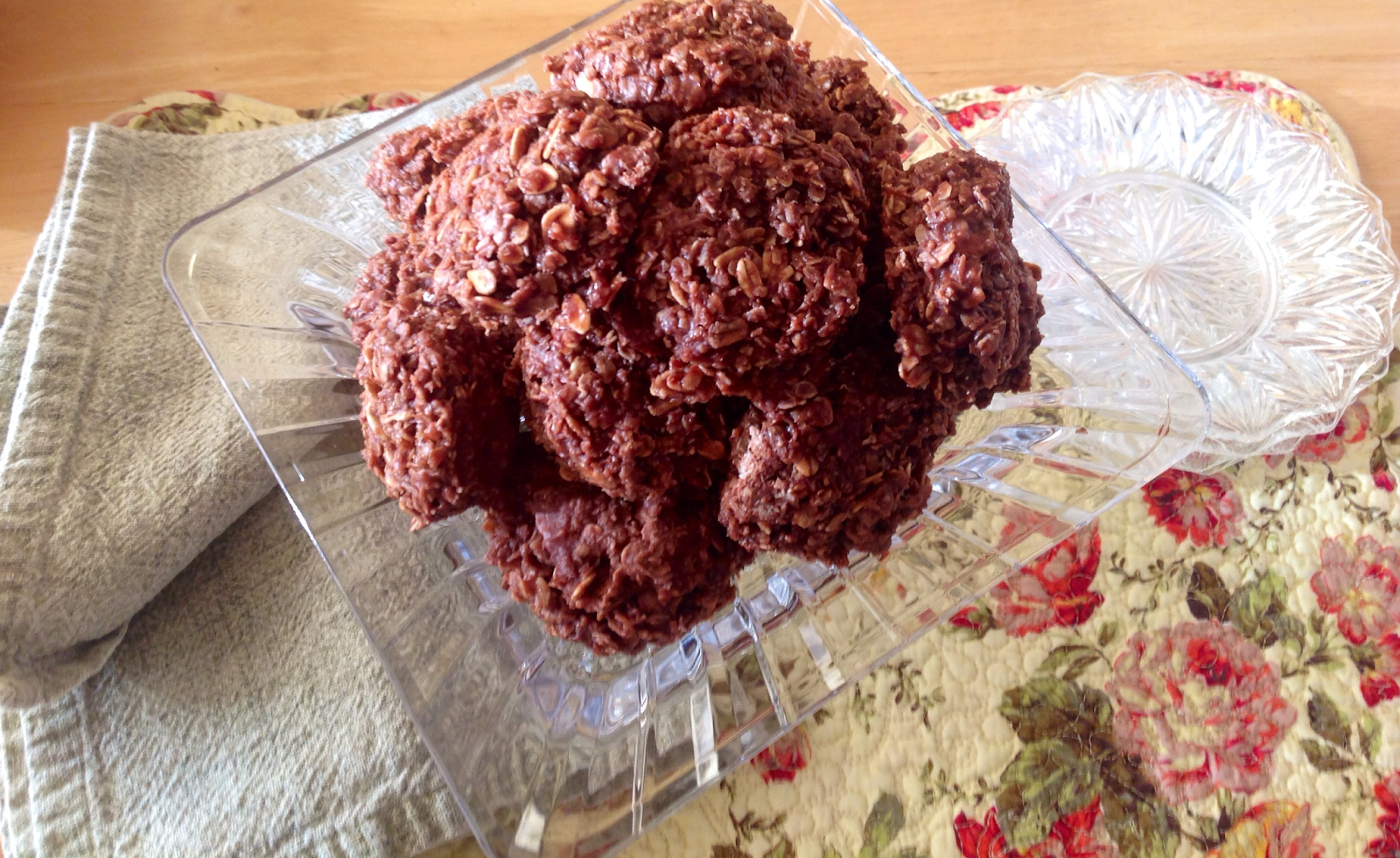 as well as their counterpart Baked Chocolate Coconut Squares, which were the result of pilot error. Who is the pilot, you say? Well, that would be me.

But, before I get too far along in my story, I need to give credit where credit is due. This recipe comes from Colleen Patrick-Goudreau’s cookbook entitled, The Joy of Vegan Baking.

The recipe is kind of self explanatory and if one follows it correctly, one ends up with delicious NO-BAKE (as in not having to turn on the oven and bake, meaning much less time in the kitchen) macaroons.
But, sometimes, things don’t turn out as planned. The secret to having a good no bake type cookie like this that sticks together, is to melt the sugar, plant based butter and plant based milk together and BOIL for two minutes so that the mixture becomes kind of sticky. Are you getting my drift?
Well, if one is in a hurry, one might not read the recipe properly and proceed to  mix the sugar in with the rest of the dry ingredients. By now, it is much too late to take the sugar out. We all know how small a grain of sugar is and how many gazillions of sugar grains might be in 2 cups.
And that, my friends is what happened to me one morning when I was preparing some treats for my afternoon bridge game with friends. Not tomorrow afternoon, but that VERY  afternoon. So, what to do, what to do?
So like the Grinch, I thought and I thought and I thought and came up with the handy dandy plan to turn this recipe into BAKED Chocolate Coconut Squares.
All is not lost, I thought (read prayed). Here is what I did. I heated up the plant based butter and plant based milk, added it to the dry mixture along with the vanilla, stirred it up and spread it in a cookie tin and baked it at 325 degrees for roughly fifteen to twenty minutes. And I ended up with this. 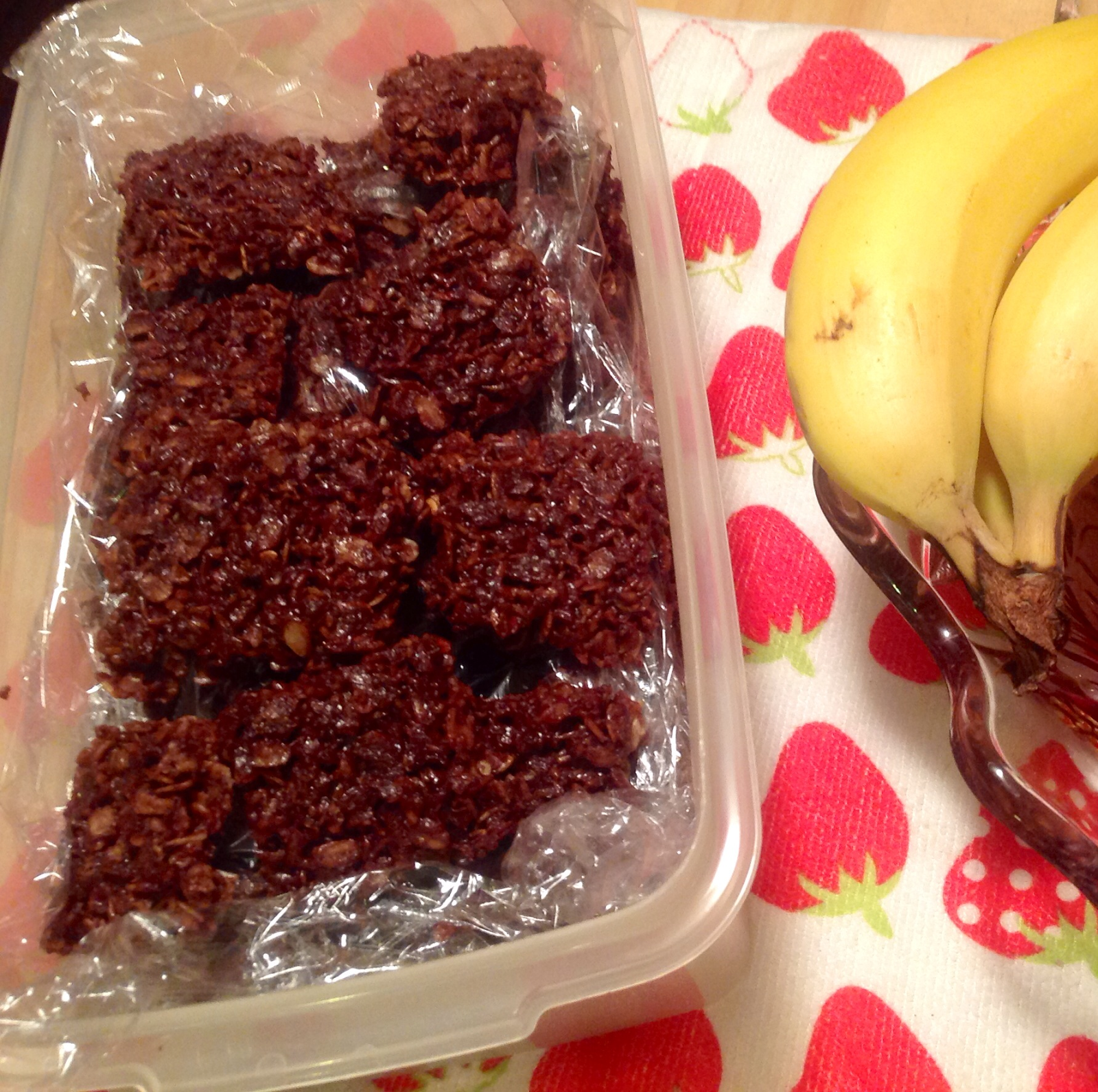 Not bad, huh!!!
Now, it didn’t happen by magic so let’s step back for a minute and go over the steps that followed the initial misstep.
Mix together all the dry ingredients including the sugar. 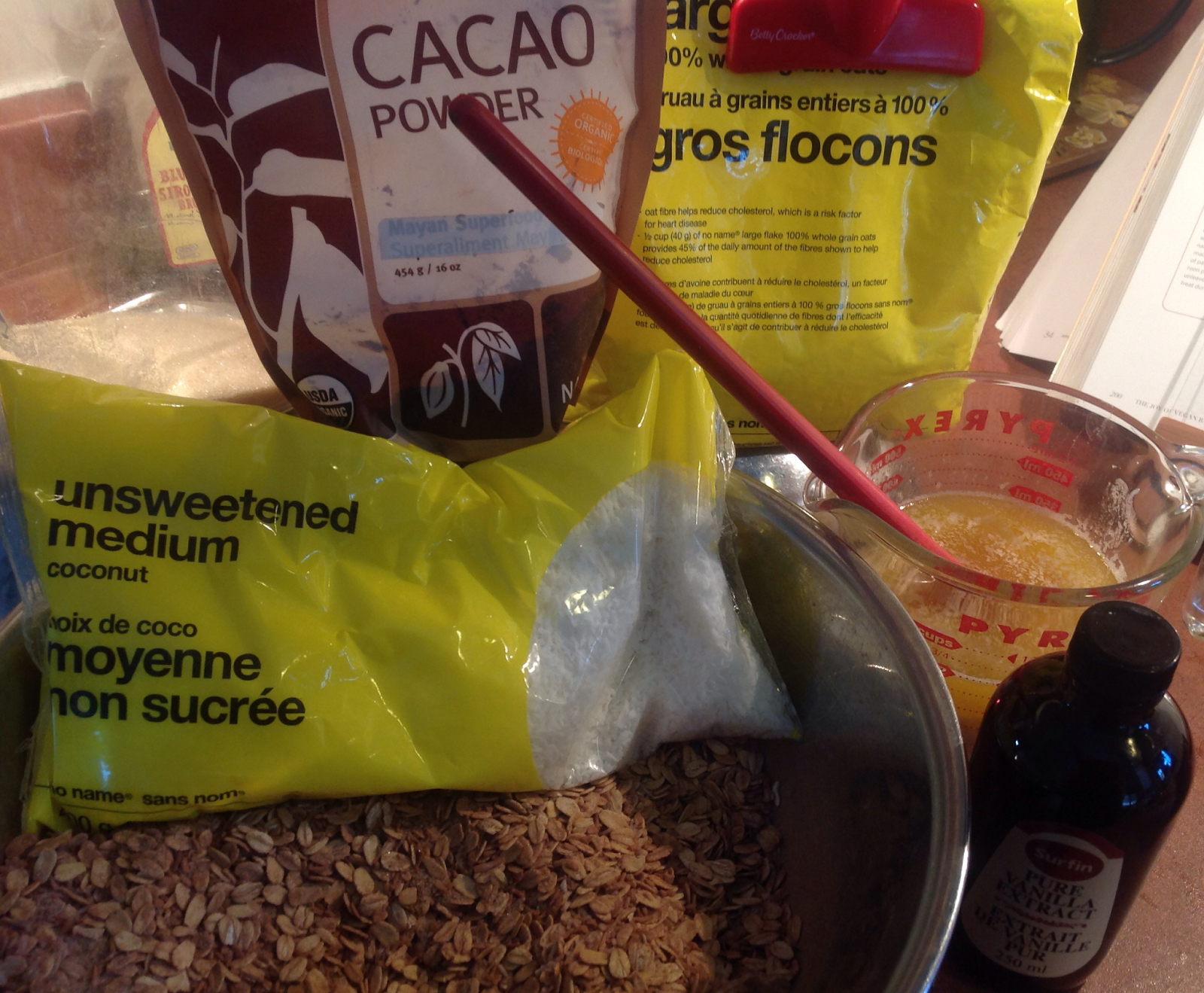 Melt the plant based butter and plant based milk together  and stir into the dry mixture along with the vanilla.

Using the back of a spoon, or an offset spatula, spread the mixture in a cookie tin with sides and press down firmly and evenly.

Place the tin on the middle rack of the oven and bake for fifteen to twenty minutes until mixture bubbles up and is firmer on the edges than in the middle.
Remove from oven and let cool for about ten minutes until the squares look firm enough to cut.

Using a sharp paring knife, carefully cut through mixture, pushing down on the handle, rather than pulling with the handle.

Let rest for another ten minutes or so, and using a small offset spatula, carefully remove squares from pan. I do this by pressing down on handle so that blade is flatter and then moving the spatula side to side until the bottom of the square is free from the pan.
Transfer to a cooling rack and let sit until firm enough to package.

Yield: about fifty squares 1″X 1″ to 1 1/2″ X 1 1/2 “.
GRAMMIE ANNIE’S HANDY DANDY TIPS
Sift cocoa powder if there are any lumps.
Use quick oats rather than regular.
Use brown sugar instead of granulated for a crispier type square.
Melt the plant based butter and plant based milk in a glass measuring cup in the microwave. Melt on high in increments of 30 seconds or so, to avoid spillage and subsequent big mess.
Use a cookie tin (17″ X 11″ X 1″) with sides if you don’t want to end up with a big, sticky mess in the bottom of your oven.
Use the regular, rather than convection setting on your oven. The mixture can blow all over the place when it heats up. Remember when I warned you about the big, sticky mess-same deal here!
Let squares cool down enough before cutting.
Push down on the handle of the paring knife rather than pulling knife. Otherwise squares will tear along the cutting line.
Use an offset spatula if you want to be able to free the cookies from the bottom of the pan. No other tool seems to do the job properly.
Let squares air dry for at least an hour before packing them. I put them in a cookie tin or plastic container between layers of plastic wrap and pop them in the freezer.
Until next time,
May all beings be happy and free.
Anne
SOME PLANT BASED(VEGAN) SQUARES ARE NEVER EATEN AS HOT AS THEY ARE COOKED!