I have to tell you, that up until this past week, this vegan has never liked lima beans, canned, frozen or any which way.. No siree-bobaroonie!
We used to have them (Yuck!) at home when I was a kid and not a vegan. They would come in a big bag brought into the kitchen by my father(vegetable farmer) after he had visited a vegetable and fruit processing plant (the name escapes me at the moment-but “littlest sister” would know). She remembers all that stuff.
Anyway they were frozen, green and kind of dried out looking.  Fear would creep into my heart when I saw him bring these things over the threshold. Not as much fear as when he brought home the dead rabbit, but these two things cannot be compared.
Down into the freezer in the basement they would go, waiting for a grand entrance of sorts, or maybe redemption. Suffice it say, my mother would try to turn these unforgiving little nuggets into something tasty-always a failure in my view.
As a vegan, I use beans a lot, so I decided to give lima beans another chance. I bought some organic lima beans and put them in a nifty plastic storage container with a bright red lid-anything to make them look more appealing.
I chose a recipe from Forks Over Knives and then proceeded to mess things up. But, everything turned out okay, because I compromised and adapted.
LIMA BEAN STEW
And ended up with this 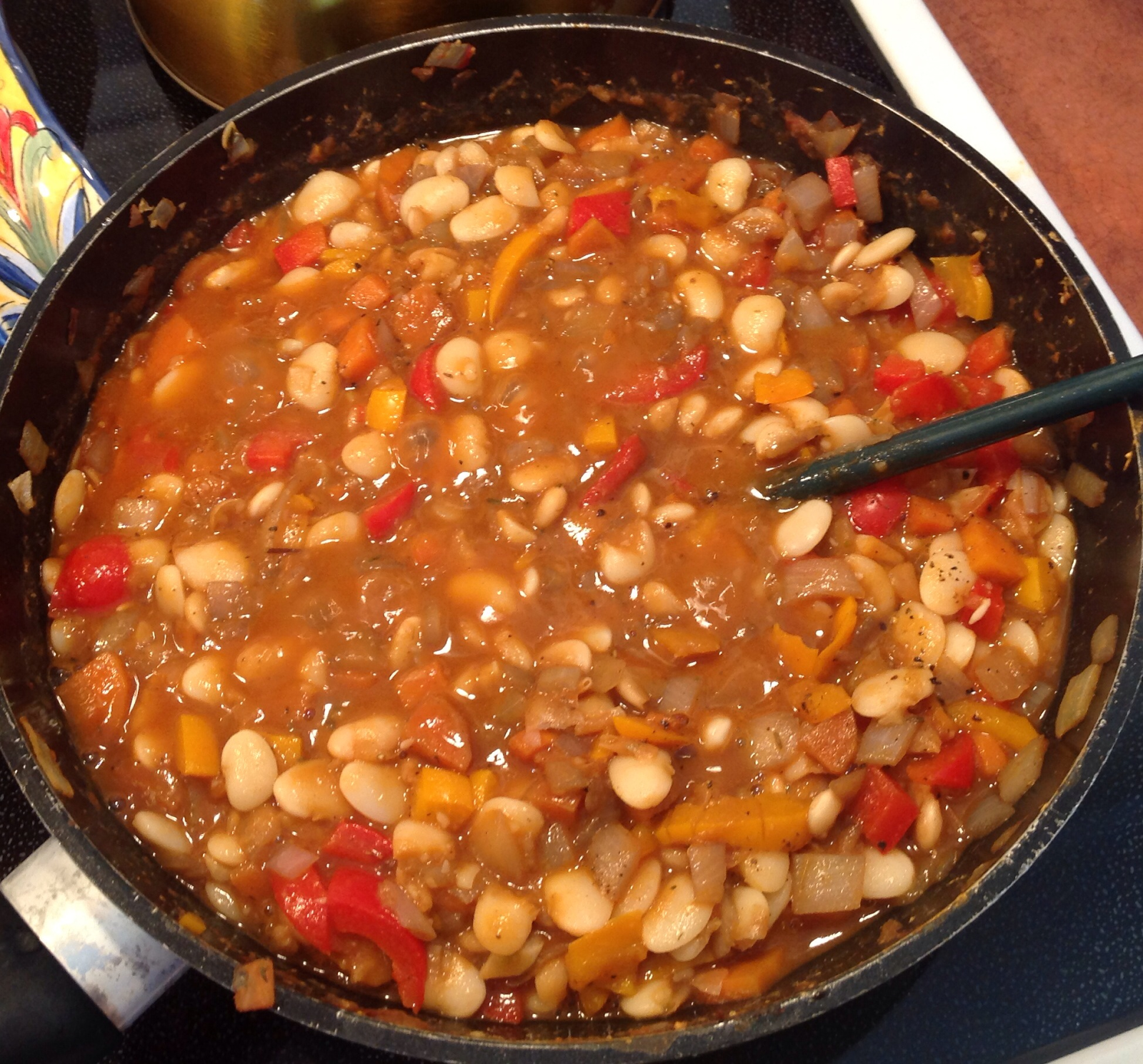 Put the soaked lima beans in a pot covered with plenty of water and bring to a boil , then turn  down to a simmer. 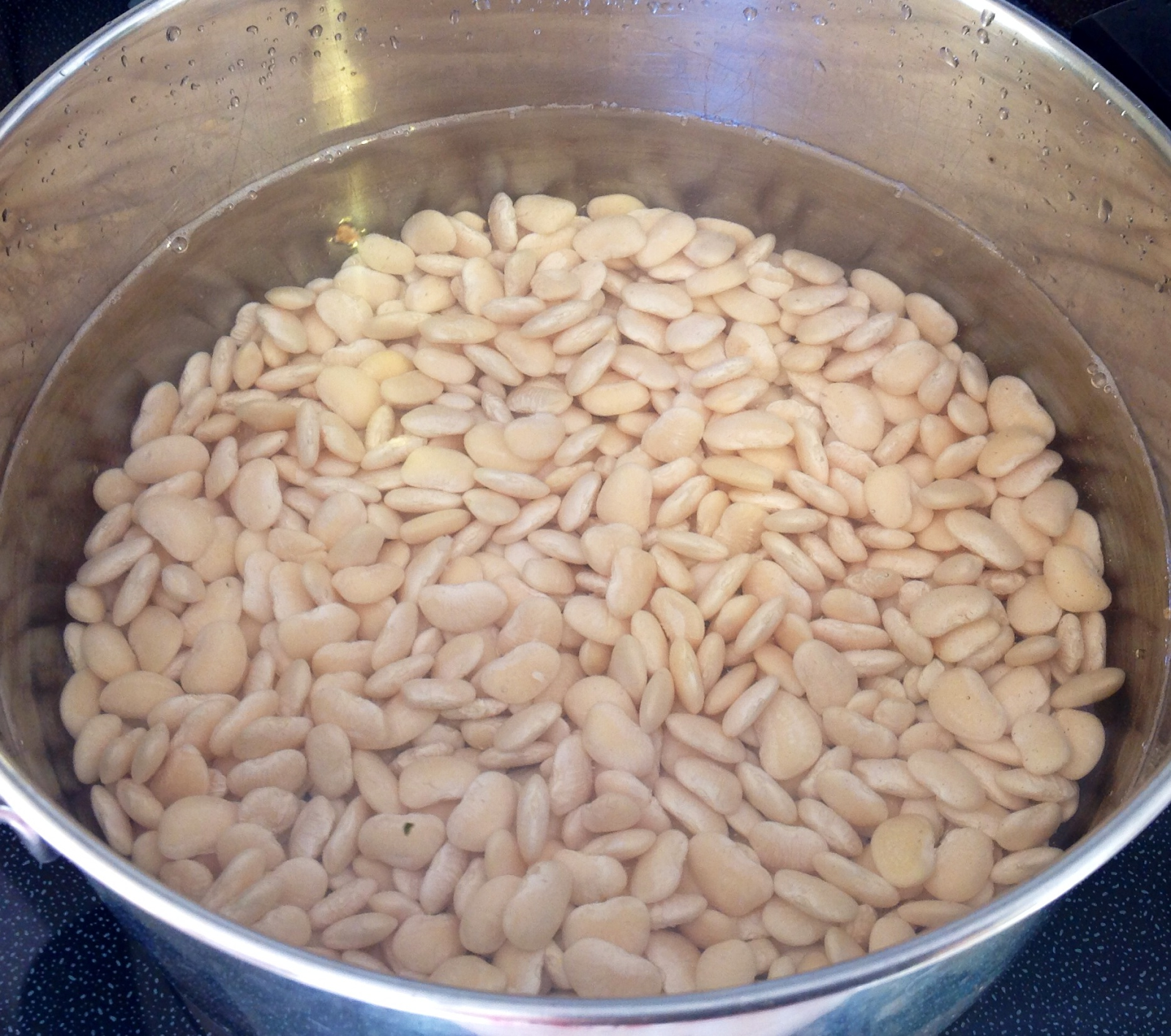 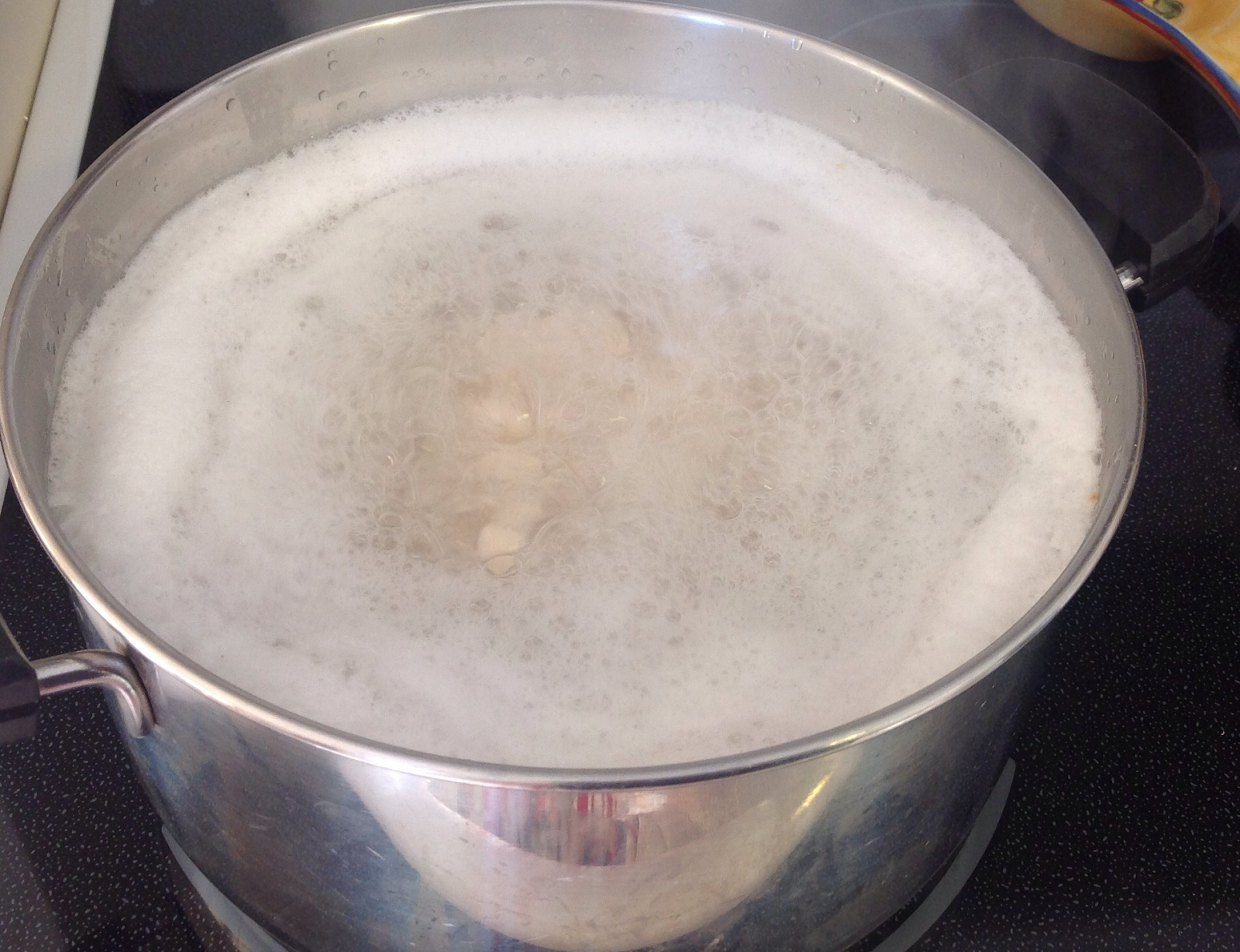 Remove foam with a spoon as needed, otherwise, things may boil over and make a big mess. These beans took about an hour to cook.

This handy little gadget  helps to keep the pot beans from boiling over.

Drain the beans and put aside to cool.(You can totally skip this first part  and open a can or two of lima beans. It works fine. I always keep some canned beans in my cupboard in case the need arises. Just be sure to drain and rinse well.)

Collect all the ingredients needed for the recipe (from the fridge, from the cupboards, sometimes from the freezer. 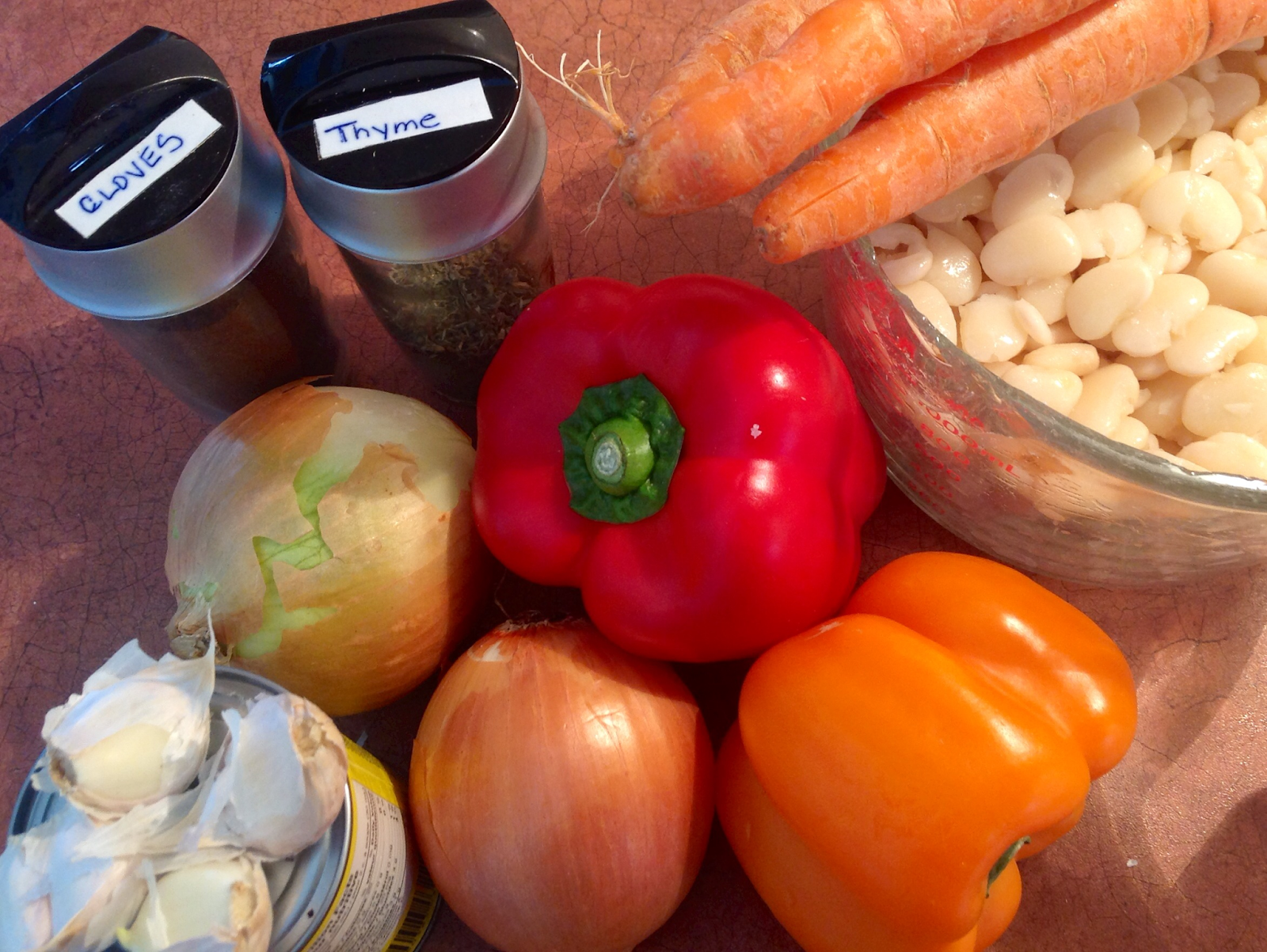 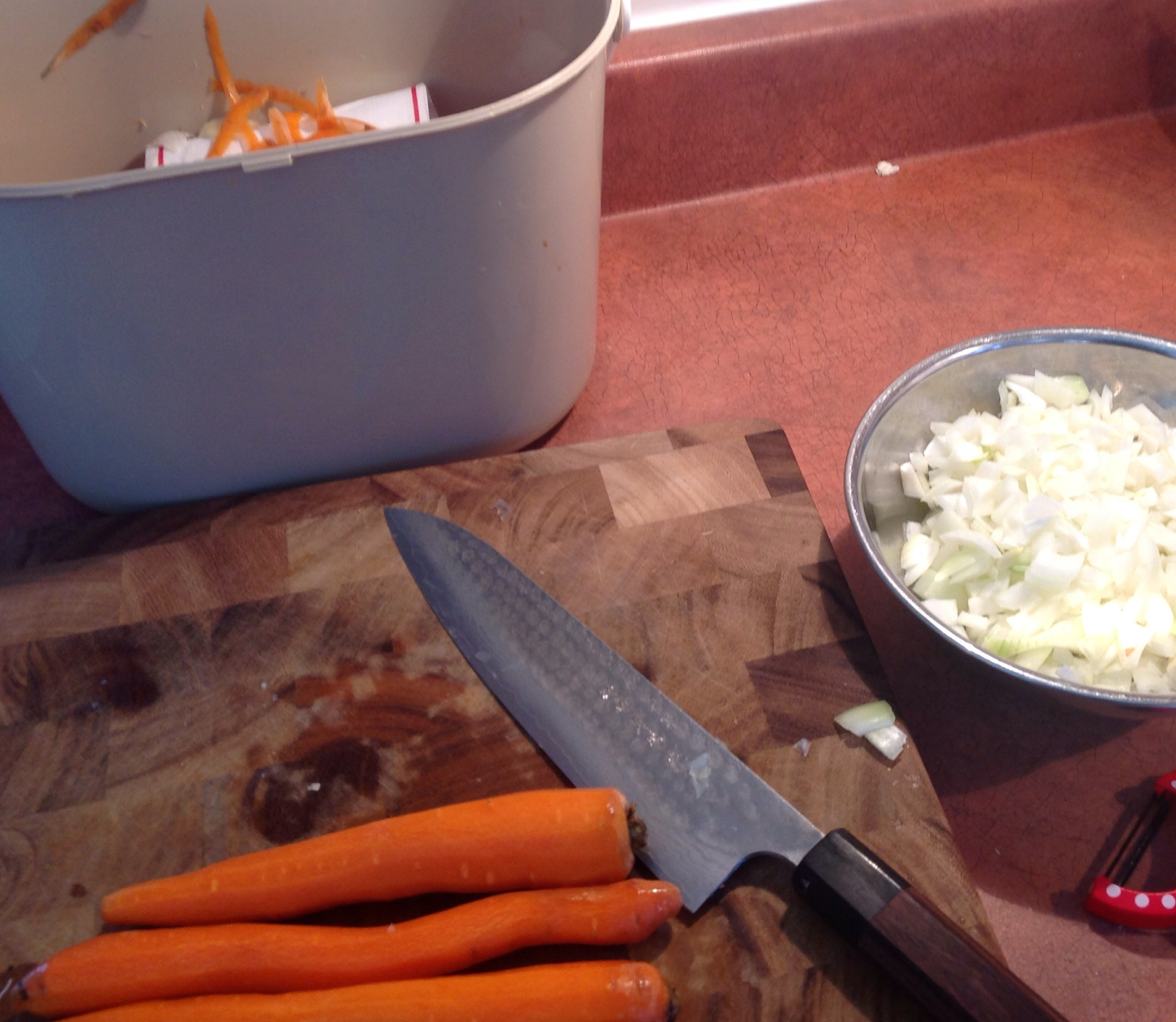 Set up an area to chop veggies-cutting board, favorite knife, counter compost or bowl for garbage and a bowl for chopped veggies.

Set other ingredients to the side where they are easily accessible. 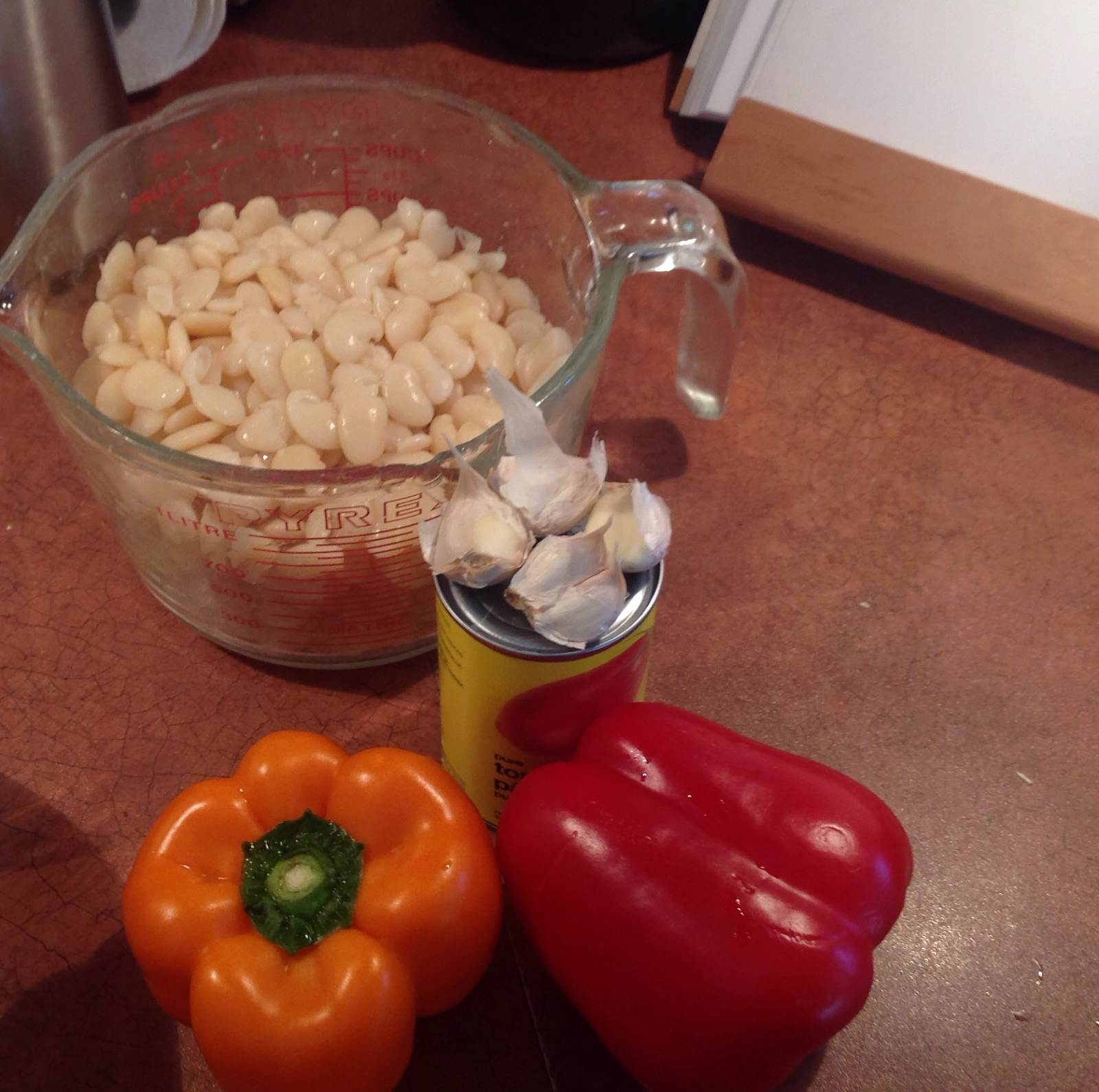 Put chopped ingredients in a bowl, ready to be cooked. I do this in one of two ways.
1.With blade of knife on its side, gently slide chopped veggies onto blade and transfer to bowl.
2. Open cupboard door under cutting board, slide cutting board over the edge of the counter, hold bowl under counter and using your hand, slide veggies into bowl.
Preference may depend on whether you like to pick veggies up off the counter or the floor, because for me, neither method is foolproof. 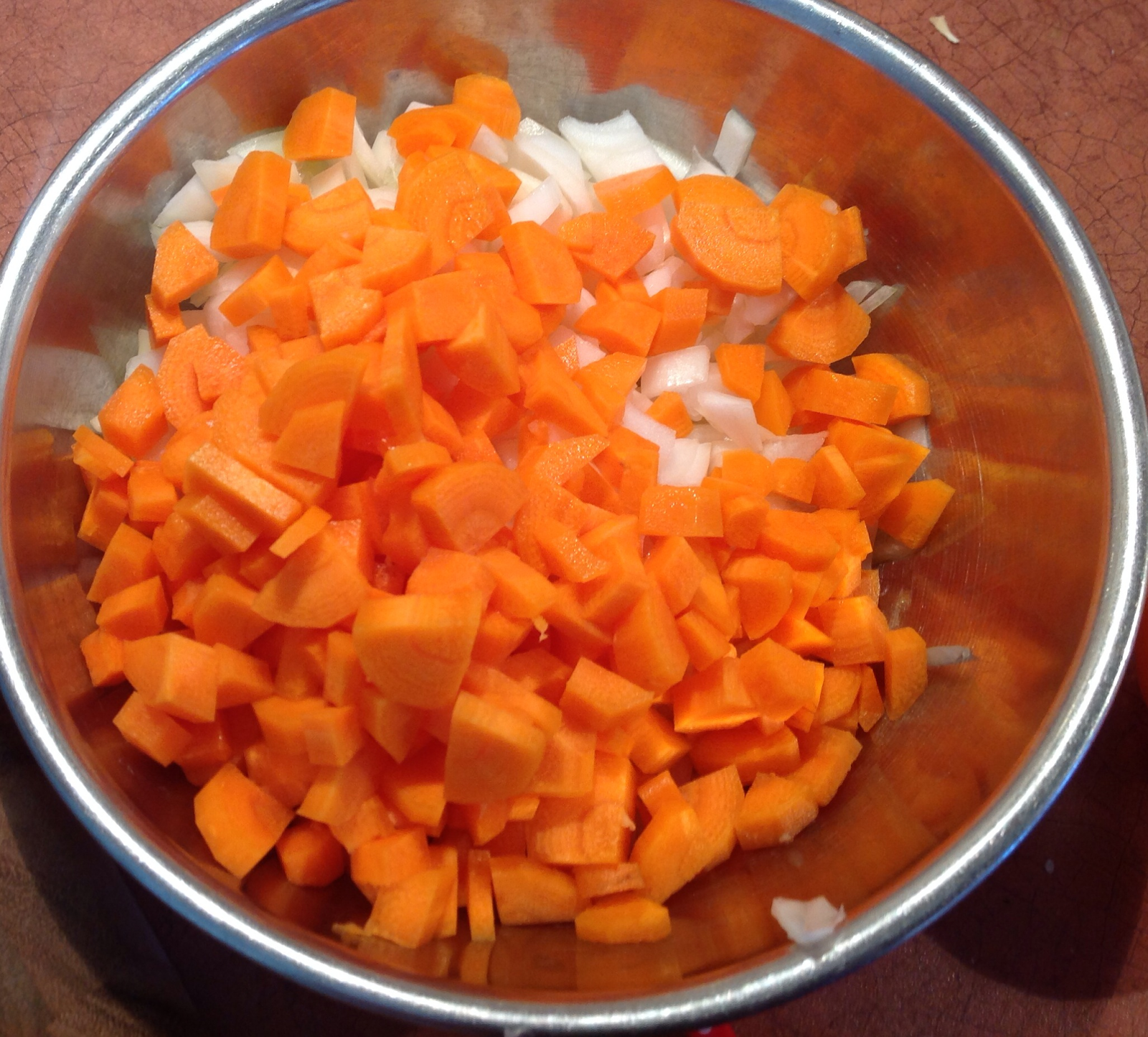 I like to  prepare all of my veggies before I start cooking. Less chance of messing up if everything is ready to go. That is, if you have read the recipe properly in the first place LOL!!
Prepare peppers one of two ways (after washing them well, of course).
1.Cut in half lengthwise and carefully use the tip of a knife to remove the insides.
2.Slice off top and reach inside with fingers to pull out membrande and seeds.
In both scenarios, cut pepper into strips lengthwise and then into small pieces crosswise.

Sauté veggies in a little oil (about two tbsp.) or water (enough to keep veggies from sticking.
Start with harder veggies(carrots and onions, eight minutes) and then add softer veggies (peppers, five minutes)

Add the spices and tomato paste and stir to combine. 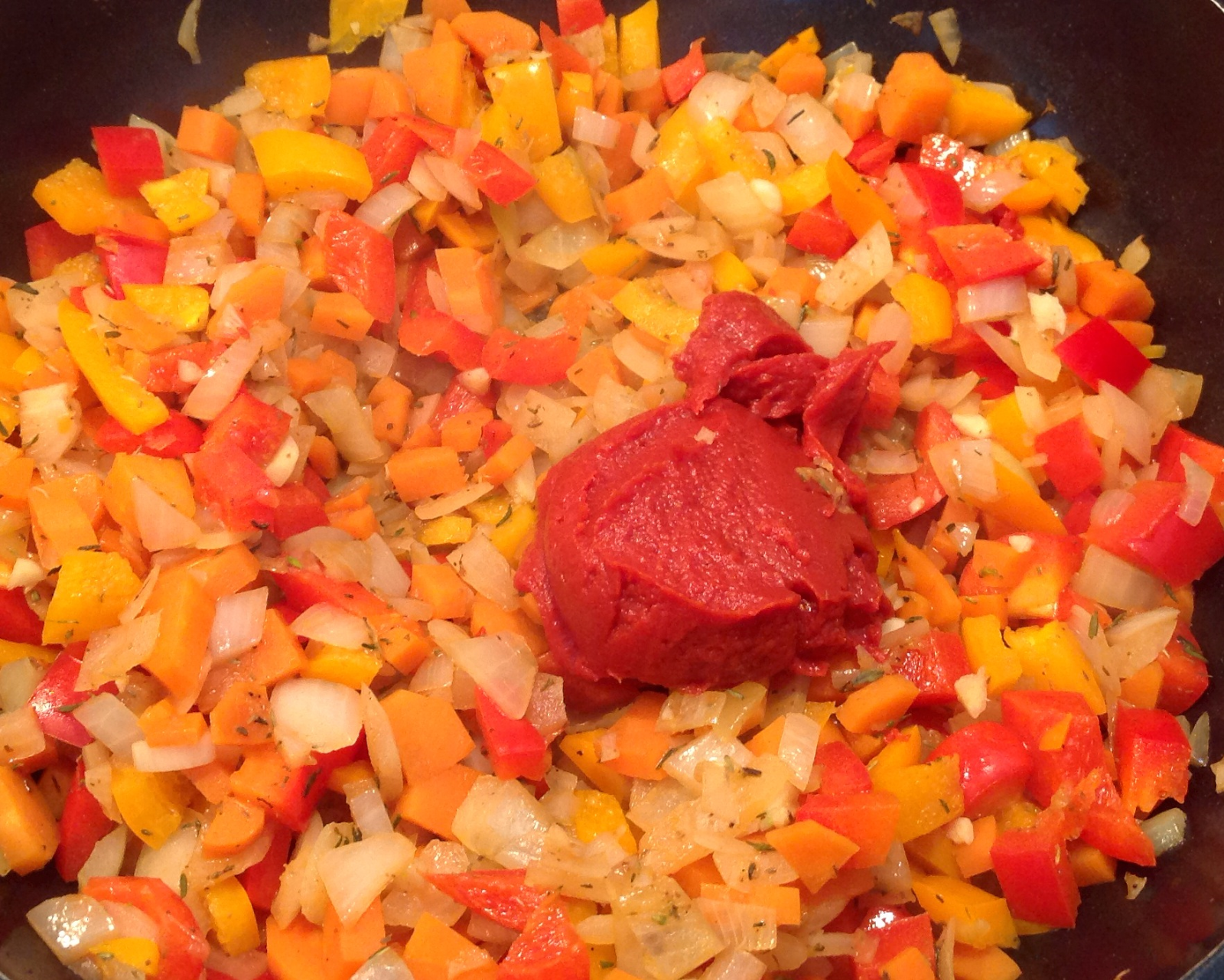 Store any leftover tomato paste in a small container in the freezer
Add the beans and water or veggie broth (quantity depends on your preferred consistency) and stir to combine.
Taste and adjust seasonings, put in a pretty bowl of your choice and…
ENJOY!!!!

GRAMMIE ANNIE’S VEGAN VIEW
Approach cooking with a sense of adventure. Read the recipe through a couple of times and once you are set up with all of your ingredients, remember to have fun. In cooking(not always in baking) substitutions in ingredients and changes in method are fine. Experiment to get the dish that suits your taste buds.
P.S. I like lima beans now. Who knew?…
Until next time,
May all beings be happy and free
Anne
DO VEGANS LIKE LIMA BEANS? – AND HANDY TIPS FOR MAKING A VEGAN STEW.

2 thoughts on “DO VEGANS LIKE LIMA BEANS? – AND HANDY TIPS FOR MAKING A VEGAN STEW.”