Well, the 2014 Super Bowl is over. I guess all that is left to do is pay the bets, go over the play by play yet another time and clean up the mess leftover from the concession stands.

Now, the most important thing that I know about professional football in the USA is that my son-in-law is a big fan. The Steelers are his team (please don’t ask me where they come from LOL). My son-in-law was a big football fan before he met my daughter, a big fan when he became a father (twice) and a big fan today. Sunday afternoon is a big deal during football season.

Why, you ask, am I posting about a sport that doesn’t really interest me? It is all about the vegan hot dogs, frankfurters, sausages and hamburgers. 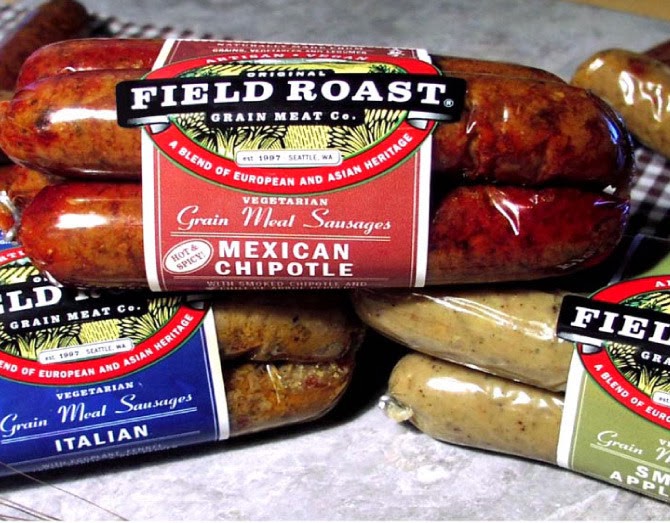 getting anything vegan there to eat and drink other than chips, fries, black coffee, soft drinks , booze and water can be a bit of a challenge. I usually try to sneak in a sandwich of some sort.

The good news, no, the great news is that if I ever go to see the Seattle Seahawks play a game at their home field of Century Link (pretty unlikely, but you never know!), I won’t have to take a contraband lunch with me. I could buy a Field Roast Frankfurter, Sausage and/or Hamburger, depending how hungry I am.

How do I know this? Well, there was a news flash a couple of weeks ago announcing that  these Field Roast treats would also be available for sale at Met Life Stadium during the Super Bowl Championship game between The Seattle Seahawks  and the Broncos, from I don’t know where (forgive me football fans).

Field Roast is a great Seattle based company which was  created in 1997. Its product line includes a number of grain meat products for all of us, vegan and non vegan alike. Their recipe is based on an ancient tradition in China of making meat from boiled grains. David Lee, the owner, added vegetables, fruits,oils and spices to create his line of products.

I am able to purchase the Sausages and the Frankfurter at The Health Tree  in Pointe Claire, Quebec, in case anyway lives in the area and would like to try out these tasty goodies. I have not seen the other products on the shelves, but does not mean they are not there.

My two favorites are the Frankfurter (as in hot dog) and the Smoked Apple and Sage Sausage (apples, sage, Yukon gold potatoes, hint of hickory smoke). 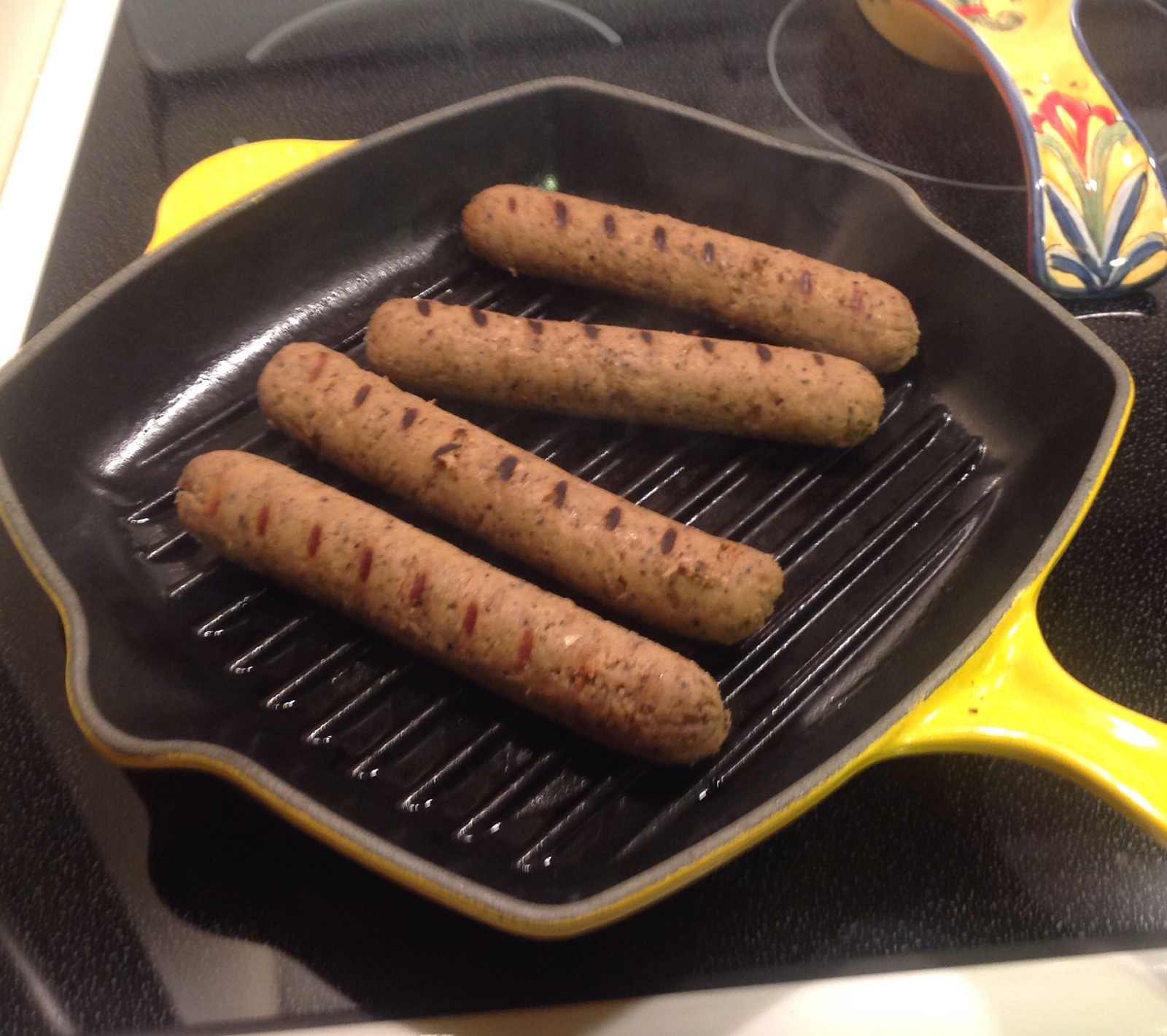 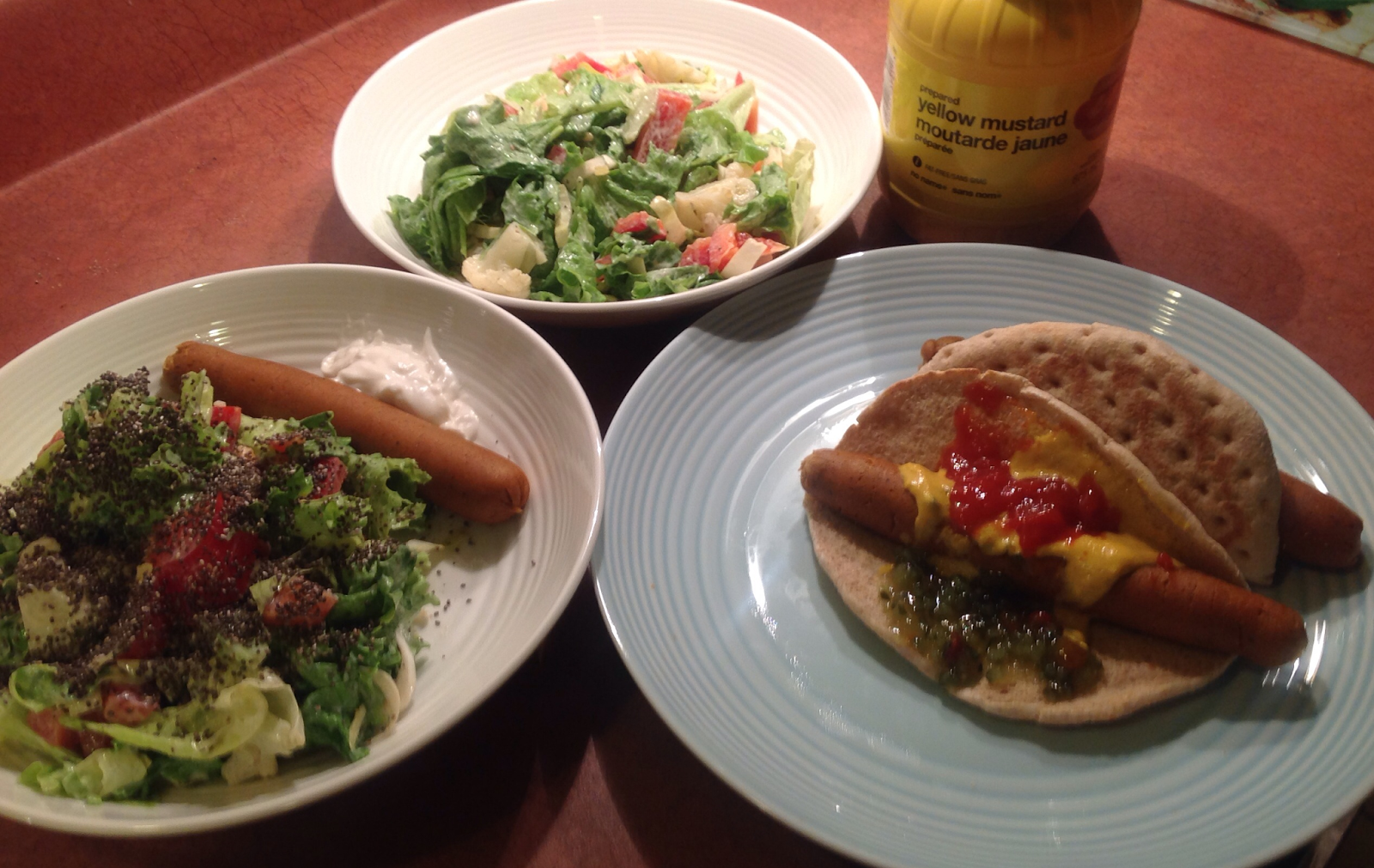 Frankfurters in a bun and beside a salad!

I am telling you, people, they really
are tasty. Try them out!!!-no fuss, no messy prep other than carefully removing the sausage from the casing.

Here they are in order of spice content to tickle the tongue. Frankfurter, Smoked Apple Sausage, Italian, and Mexican Chipolte.

They are totally  cruelty free and pack a one two punch (wish I knew a football term that I could use) in the protein department. There is no funny aftertaste or consistency like can be found in the dogs and meats made with soy protein isolate (which I try to stay away from anyway).

GRAMMIE ANNIE’S VEGAN VIEW
I am happy, because I know that ,once a big event like the Super Bowl showcases  vegan food options that everyone will love and no one will laugh at you for trying, other venues and events will do the same.

I call that progress and I salute the Seattle Seahawks, their owners, players and David Lee of Field Roast for making this happen.. Touchdown!!! (probably the only football term that I know)

Until next time,
May all beings be happy and free.

TAKE ME OUT TO THE VEGAN BALL GAME

2 thoughts on “TAKE ME OUT TO THE VEGAN BALL GAME”